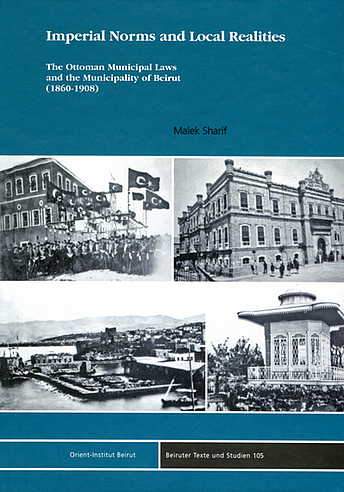 The Ottoman Municipal Laws and the Municipality of Beirut (1860-1908)

In this study, Malek Sharif (AUB) revises and rejects the widely held assumption that the municipal institution of the Ottoman Tanzimat period was imposed on the provinces by the central authorities of the Empire. This study provides a differentiated picture of the Beirut municipality, achieved through the careful perusal of the consecutive Ottoman laws, in addition to a variety of other contemporary sources including the local press, Ottoman almanacs, memoirs, Western consular correspondence, travelogues and Ottoman archival material.Special attention is given to the formative years of a number of municipal institutions in Syria which so far had been overlooked. The detailed examination of primary sources has revealed that the municipal institutions in Syria were not established only in the 1870s, as has been a common view among historians, but a whole decade earlier. As Sharif shows convincingly, the history of the municipality of Beirut is more nuanced than hitherto assumed.