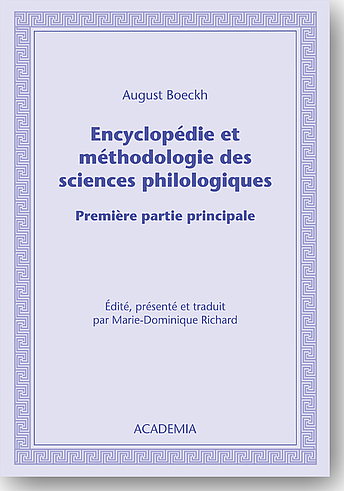 Publication of the theoretical part of the work of August Boeckh, entitled Encyclopedia and Methodology of the Philological Sciences, fills a gap in philological studies in France. This work, published posthumously in 1877 (Teubner, Leipzig) by one of the disciplies of Boeckh, E. Bratuschek, has lost none of its timeliness. Boeckh himself, the most brilliant disciple of de Friedrich Daniel Ernst Schleiermacher and the most universalist of the philologists of his time, considered his lessons on Encyclopedia and Methodology of the Philological Sciences to be 'his most personal and most important scientific work'.

The polemic between Gottfried Hermann and August Boeckh concerning the conception and the object of philology that followed the publication by Boeckh of the Corpusinscriptionumgraecarum constitutes the intellectual background to the genesis of the work of Boeckh, who defines philology there as 'the knowledge of what is known', that is, as the 'recognition of a given element of knowledge'. The subdivision of the conception of philology into two parts, one of a formal nature, the other of a material nature, resolves it completely. The formal part includes the two inseparable moments of interpretation, that is, hermeneutic or 'absolute comprehension' and critique or 'relative comprehension'. The definition of philology as 'knowledge of what is known' holds good for the four fundamental types of hermeneutic (and of critique) that Boeckh differentiates, following his master, Fr. D. E. Schleiermacher: grammatical and historical interpretation, 'which interests itself in the objective conditions of what is communicated in a text', and individual and generic interpretation, 'which studies its subjective conditions of production'. The circularity of the task derives from the fact that the four types of interpretation (and of critique) constantly interfere with one another and mutually presuppose one another.


Boeckh pushes the universalization of hermeneutics even further than his master Schleiermacher, contributing in this way to the elaboration of a philosophical hermeneutic and opening the path to historicism.